Hope in a Time of Crisis: Charitable Giving Soars During the Year of 2020 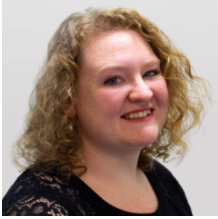 Reflecting back on this past year feels like a journey through a decade instead of 365 days. How do we describe a year that was filled with challenges, but also growth? Let’s use the word terrific. While today it usually means magnificent or extraordinary, the original definition was used as a synonym for frightful. Frightful seems like a perfect word to describe 2020 at first. Between a global pandemic, fierce wildfire and hurricane seasons, and fighting for social justice, this year was filled with many challenges. But this year was also filled with record high donations to different causes across the globe and inspiring moments of people banding together to support one another. Even during these tiresome and frustrating months, people have found a way to help their neighbors when they are down themselves. Is it possible that despite all of the obstacles, our communities coming together has actually made us stronger? As with many times in our history, when tragedy ripples across the country, people rally together to support their fellow neighbors.

In order to become stronger, we have to overcome challenges. Due to the recent economic downturn, more Americans found themselves scrambling. Unemployment hit a high back in April at 14.7% nationwide. While it has since dropped, November still saw the unemployment rate double the pre-pandemic rate of 3.6%. As unemployment benefits begin to disappear, Americans are struggling to keep their households running. Experts speculate that the United States is experiencing more hunger now than at any time since the Census Bureau started collecting data regarding food insecurities in 1998. Currently, 1 in 8 American adults have reported they sometimes or often don’t have enough food to eat, affecting almost 26 million adults. In households with children,1 in 6 adults have reported not having enough food. When compared to the pre-pandemic, these figures have continually increased, especially since October and November.

While these statistics are alarming, they are only half of the story. As more Americans struggle with keeping their heads above water, there is a continuous effort across the country to donate to both local and national organizations. This year more than ever, communities have seen an increase in neighbors wanting to give back and help out in any way possible. GoFundMe, for example, saw over 150 million donations, 30 million more than last year. Even during a time when nearly everyone is struggling, people still found a way to support others in need. About 70% of this year’s donations were less than $50, demonstrating that every donation counts, no matter the size. This year, donors from 77 countries rallied together and contributed to a GoFundMe page set up to help feed Americans struggling with food-insecurities. Together, they raised over $44 million, the most ever raised by a GoFundMe fundraiser. 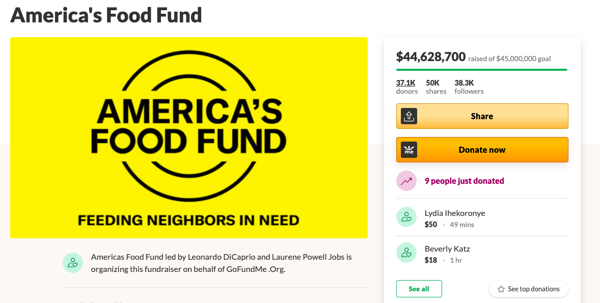 GoFundMe was not the only organization to see an increase in donations this year. Statistics collected from two different GivingTuesday events also demonstrate the power of people coming together. Starting with the #GivingTuesdayNow campaign that was launched in May, the United States alone was able to collect over $503 million just through online donations. The Tuesday after Thanksgiving saw even more record numbers. GivingTuesday had its most successful year since the international campaign started in 2012. This year, the organization saw a 29% increase in participants, and a total of 34.8 million donors. These donors gave a total of $2.47 billion, an increase from $1.97 billion donated the year before. Asha Curran, the co-founder and CEO of Giving Tuesday commented:

“Throughout this year, we have seen people driving extraordinary efforts rooted in a pursuit of equity, community, and shared humanity-driving giving and action across all races, faiths, and political views. We know that when we act collectively- what we can, with what we have, from where we are- we can make massive change happen.”

2020 will not only be the year where individually we grew, but we grew as a country. Even through the toughest times, we remembered that we are all in this together. Our lives have completely flipped this year. We are learning to restructure our budgets, balance remote working and school, all while distancing ourselves from loved ones. But through this terrifying time, so many are making sure to leave no one behind. We are donating back in whatever way we can, whether it’s time, resources, items, or money. Even during a period where it feels like it’s everyone for themselves, that may not be the case. When we take a step back, we can better understand that we are all fighting this together. A representative from GoFundMe released in a statement that “throughout the hardships of 2020, we’ve seen an extraordinary outpouring of generosity from a global community that’s united by a desire to take action and help others. It’s important to remember that we’re our best when we come together.”

What we can take away from 2020 is that even when it was easier to shrink inward and only focus on ourselves, many people chose to reach out and help others. The most remarkable thing about this year was the number of people that made sure to help out, proving that it’s not the amount someone donates, but the fact that they made the effort to help in any way they could. Just as it is important to remember the challenges that the world was faced with, it’s important to remember what blossomed as a result. When our nation was faced with hurdles, communities came together. Instead of allowing our neighbors to fall, we placed importance on all rising together to the finish line. Everyone will have a story of how their 2020 went. And while it’s important that we remember what made it so awful, it’s even more important to remember what we learned from it.

As we move forward into the new year, it’s crucial that we take what we learned in 2020 and apply it. Part of this will be continuing to give back to our local communities and nonprofits with the same level of concern that we had this past year. Becoming a digital volunteer through Opinions4Good, for example, is a great way to give back to your favorite charitable causes. With over 300 nonprofit partners of varying missions, there are plenty of organizations to choose from that need your support! For more ways you can give back to nonprofits during COVID-19, check out this blog post. 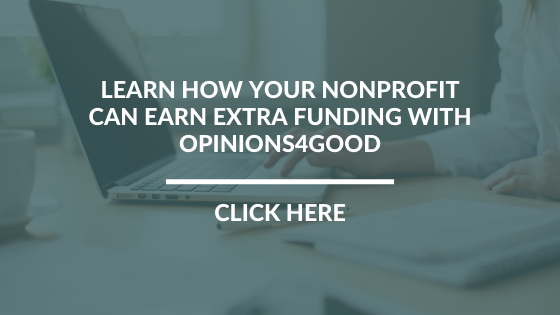